Posted on August 23, 2018 by Richard, Chief Editor Leave a comment

A Ugandan pop star-turned-politician who opposes the country’s longtime president was charged with treason in a civilian court on Thursday, minutes after a military court dropped weapons charges.

The new charge was expected to bring fresh outrage from Ugandans and global musicians after Robert Kyagulanyi Ssentamu, also known as Bobi Wine, alleged he had been severely beaten while in detention. The government denies the claim.

Mr Ssentamu has emerged as an influential critic of president Yoweri Museveni, especially among youth, after winning a parliament seat last year.

The 36-year-old had been charged last week with illegal possession of firearms for his alleged role in an incident in which Mr Museveni’s motorcade was pelted with stones.

A military court freed him on Thursday but the politician was re-arrested by police and taken to a magistrates’ court.

Mr Ssentamu limped during his appearance in military court and appeared to cry as he rubbed his eyes. A colleague wrapped the national flag about his shoulders. He sat in the dock in magistrates’ court as his lawyers said he was unable to stand on his own. 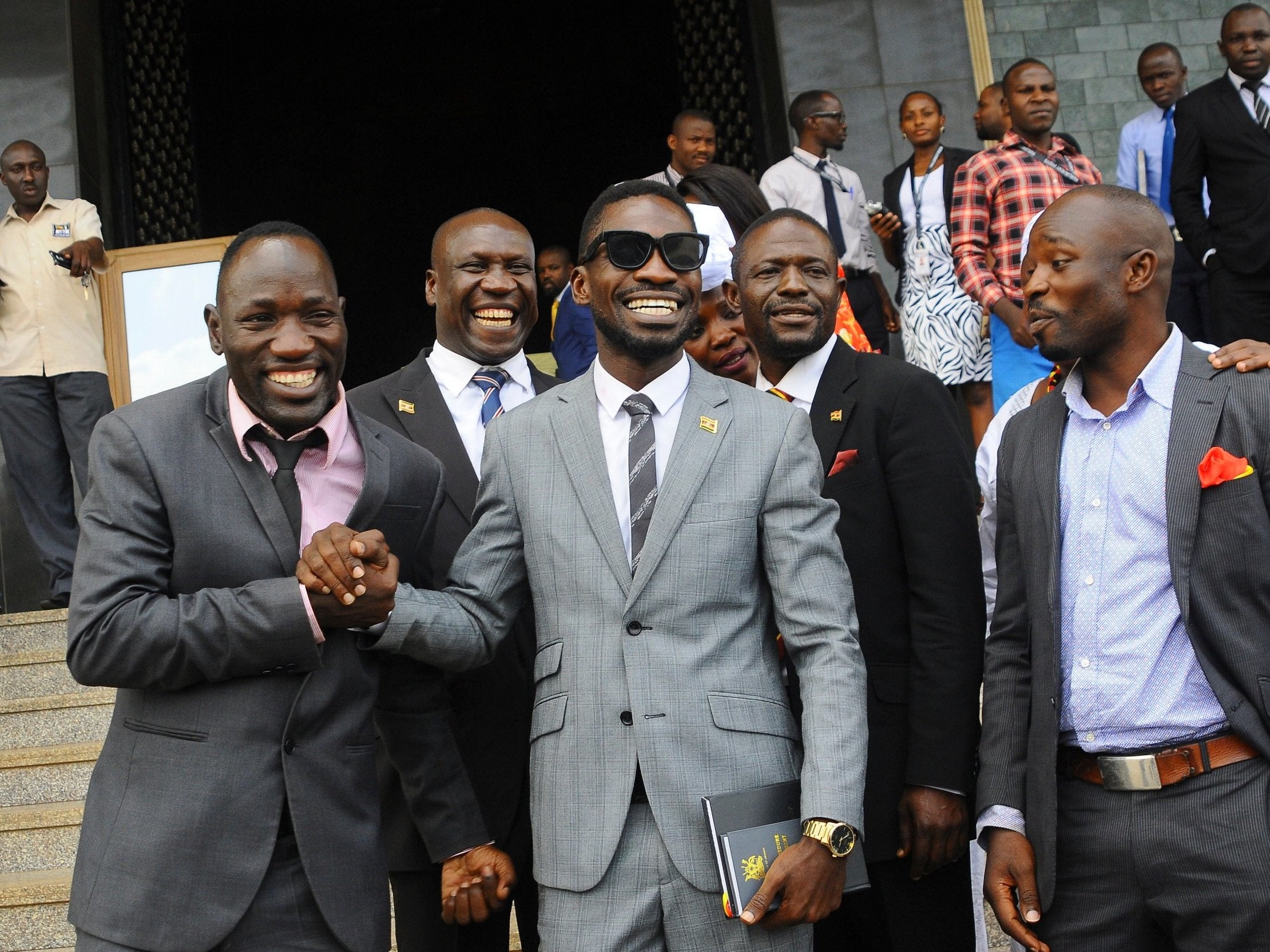 Lawyers for Mr Ssentamu asked the magistrate to order his remand to a health facility. The magistrate ruled that Mr Ssentamu should be allowed access to his own doctors. He was remanded until 30 August.

He had been arrested with four other opposition politicians, three of whom also face treason charges. A fifth has been hospitalised with injures allegedly sustained during detention.

Mr Ssentamu’s appearance on Thursday was the first time he had been seen in public since his detention. He clenched his fists and greeted supporters.

In recent days Uganda’s government has faced mounting pressure at home and abroad to free him. Security forces have violently put down street protests demanding his release.

On Thursday, other opposition figures expressed concern about being targeted by security forces. “Every way out of my home is barricaded since very early today,” Kizza Besigye, a four-time presidential challenger who has been jailed many times, tweeted.

Police spokesman Emilian Kayima later said Mr Besigye was arrested when he tried to force his way out.

Police were also deployed, under what the spokesman called “preventive arrest,” at the homes of certain Ugandans after receiving intelligence that some “wanted to engage in criminal activities”.

I Consider Being Gay Among the Greatest Gifts God Has Given Me.

Posted on October 30, 2014 by Richard, Chief Editor Leave a comment

Tim cook is the current CEO of Apple

The current CEO of Apple inc, famous for its iphones and touch technologies, has told Bloomberg Business Week that being gay has given him an opportunity to understand the challenges that people in other minorities face every day. It has helped him to living a life full of empathy, which has led to a richer life. “It’s been tough and uncomfortable at times, but it has given me the confidence to be myself, to follow my own path, and to rise above adversity and bigotry. It’s also given me the skin of a rhinoceros, which comes in handy when you’re the CEO of Apple.” He said.

Speaking about the word “gay”, he has mentioned that it has changed so much since when he was a little boy.  America didn’t disappoint, it has also changed the way it perceives the word. Today, America is passing laws across the states that equalize marriage, and one should mention that stars, political figures, and other public figures that have come out lionhearted have helped to alter the way people’s perceptions of gays and made the culture more tolerant. Cook also mentioned that just people are still fired, others evicted from their apartments, denied to visit visitors just because there are laws on the books in a majority of states that allow to do so based on their sexual orientation.

Team cook said, ‘“I don’t consider myself an activist, but I realize how much I’ve benefited from the sacrifice of others. So if hearing that the CEO of Apple is gay can help someone struggling to come to terms with who he or she is, or bring comfort to anyone who feels alone, or inspire people to insist on their equality, then it’s worth the trade-off with my own privacy.”’

While things seem to take a whole new level in the United States, let’s not forget that closer to home, in Uganda, a law against gay rights was signed by his excellence President Museveni a year ago. Few will deny that this has something to do with the culture, but if you look back it never was easy in the United States too. Cook admits that this wasn’t an easy choice especially because privacy remains important to him. He is emphasized that this won’t stop him from striving to become the best CEO he can be. He also gave credit to social progress that now understands that a person is not defined only by one’s sexuality, race, or gender.

“I’m an engineer, an uncle, a nature lover, a fitness nut, a son of the South, a sports fanatic, and many other things.” He said.

He hopes that people will continue to respect his desire to focus on things that interest him the most. Apple has long advocated for human rights and equality for all and that includes gay rights. Apple has strongly supported the workplace equality bill before Congress, and has done so for marriage equality in the state of California.